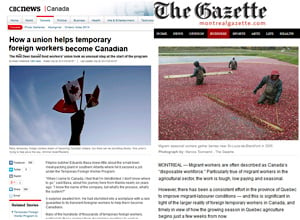 Toronto – May 17, 2014 – Thousands of migrant and temporary foreign workers know the advantage of UFCW Canada membership – and so do millions of readers recently reached through high profile stories on the CBC website and in the Montreal Gazette.

A recent article in the Gazette praises the decades-long efforts of UFCW Canada to uphold the labour rights of migrant agriculture workers in Quebec, where a number of bargaining units have achieved groundbreaking collective agreements. The article also highlights UFCW's breakthrough legal advocacy for migrant agriculture. The Montreal Gazette reaches over half-a-million English readers a week.

Millions more visitors to CBC's national website have been reached with a recent story about UFCW Canada and members who came to Canada as Temporary Foreign Workers. The lengthy and very positive report explains how UFCW Canada Local 1118 membership has brought workplace justice and a pathway to Canadian citizenship to thousands of Temporary Foreign Workers at the Cargill packinghouse in High River, Alberta.

"These two stories are just a partial snapshot of the tremendous work UFCW Canada Local Unions across the country do every day to bring fairness and opportunity to all members, including migrant and temporary foreign worker members," says UFCW Canada National President Paul Meinema. "Even in the media, where positive coverage of unions is pretty rare, our positive impact as Canada's most dynamic union is breaking through."