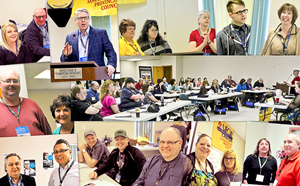 Saskatoon – ­­April 24, 2014 – Members, activists and leaders from Locals 248P, 649 and 1400 recently came together for the annual meeting of UFCW Canada’s Saskatchewan Provincial Council. Delegates focused on sharing ideas and building strategy to best protect Saskatchewan’s working people in the face of increasing attacks on labour by federal and provincial ruling parties.

This year’s Provincial Council was joined by a number of labour leaders, progressive politicians and community organizations. UFCW Canada National President Paul Meinema thanked the Saskatchewan Local Unions and activists for standing strong to safeguard the gains made for our members and their families across the province. Larry Hubich, the president of the Saskatchewan Federation of Labour, and Cam Broten, the leader of Saskatchewan’s New Democratic Party, spoke about the need for solidarity to effectively confront the anti-union agenda of the Sask Party government. UFCW Canada National Representative Bob Linton facilitated a workshop on Together Fairness Works – a national campaign to educate members about Stephen Harper’s assault on working people and their unions.

Representatives from the Saskatoon United Way and Saskatoon District Labour Council also thanked delegates for their continuing dedication to local community outreach programs. The Saskatchewan Provincial Council meeting was capped off with a social evening to raise funds for the Leukemia and Lymphoma Society of Canada.

“Congratulations to our local unions in Saskatchewan for organizing another successful provincial council meeting,” says Brother Meinema. “As members of the most progressive union in the province, you are leading the fight in Saskatchewan for good jobs and fairness at work.”