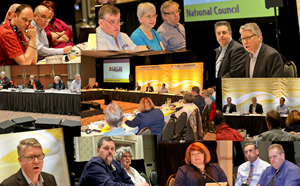 Toronto – April 17, 2014 – The UFCW Canada National Council met in Toronto on April 15 and 16 to focus on the union’s organizing efforts in the retail food industry, and to discuss the best way to build political momentum for fairness as workers and their families face unprecedented assaults on their labour rights from governments at all levels.

"In the face of intense attacks from Ultra-Conservative politicians like Stephen Harper and Ontario PC Boss Tim Hudak, it is incumbent upon our union to show Canadians that working together for fairness achieves positive results for all workers," said Paul Meinema, UFCW Canada's National President. "And that's what our strategic organizing and member engagement initiatives will be focusing on moving forward."

As the union’s national executive board, the UFCW Canada National Council meets twice a year to assess the state of the union and decide on national strategies for strengthening the membership’s bargaining power with employers and helping more workers unionize.

The meeting was heavily focused on organizing, as the National Council discussed strategies to help more Canadians join the union and obtain the type of good jobs that thousands of UFCW Canada members enjoy by working together. In particular, the Council committed to refocus on the union's core industries – such as retail, food processing, and health care – for future organizing drives, and to build UFCW Canada's brand recognition as the leading voice for food and retail workers in Canada.

Over the two-day meeting, the National Council also heard from Canadian Labour Congress (CLC) President Ken Georgetti. With the support of UFCW Canada, Brother Georgetti has led the successful rollout of the Together Fairness Works campaign, a joint effort among the Canadian labour movement to fight back against the growing assault on workers' rights and their unions by Ultra-Conservative parties, politicians, and corporate elites.

Georgetti said the ultimate goal of the Together Fairness Works campaign is to build a network of solidarity that can alert and empower activists to beat back anti-worker propaganda with the truth, and explained that he is seeking re-election as CLC President in order to fully implement and expand the campaign. He thanked UFCW Canada for its efforts to build fairness for workers and their families by supporting the Fairness Works campaign through our website resource, webCampus courses, promotional materials, and various workshops.

The next UFCW Canada National Council meeting is scheduled for the fall.