Another victory for agriculture workers 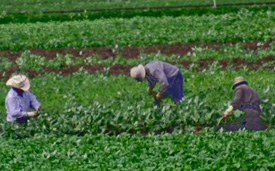 Montreal – March 5, 2014 – UFCW Canada, which has been advocating for respect and the recognition of agriculture workers' rights in Quebec for nearly five years, is pleased with the provincial government's decision to grant seasonal agriculture workers the same rights as all workers in Quebec, including, in particular, the right to join a union.The government clearly showed that it was determined to remedy a discriminatory situation that has negatively affected all seasonal agriculture workers when it chose not to appeal a ruling by the Superior Court of Quebec, which had given the Legislature a year to modify the Labour Code.

On March 11, 2013, the Superior Court of Quebec had upheld the ruling by the Commission des relations du travail (‘‘Quebec labour relations board’’) stating that Article 21, Clause 5, of the Labour Code was unconstitutional and of no force or effect due to the fact that it violated the right to freedom of association, which is protected according to the Quebec Charter of Human Rights and Freedoms.

‘‘We are pleased on behalf of all agriculture workers. With this victory, we see the end of an important chapter in a long battle that has already been before the courts for five years", says UFCW Canada Local 501 representative Michel Tardif who oversees matters relating to agriculture workers.