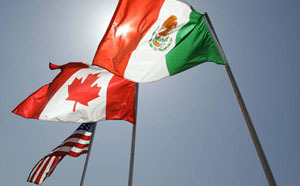 Toronto – January 27, 2014 – This year's North American Leaders' Summit in February coincides with the 20th anniversary of the North American Free Trade Agreement (NAFTA). The venue for the summit is Mexico, which makes the timing opportune for Prime Minister Harper to end his government's silence in the face of overwhelming evidence which corroborates that Mexican government officials violated Canadian law, the human and labour rights of Mexican citizens working in Canada, as well as provisions of NAFTA.

The evidence, now back in the hands of the BC Labour Relations Board, clearly points to Mexican government and consular officials blacklisting certain Mexican migrant agriculture workers from returning to Canada who were suspected of being union sympathizers. On January 15, the Supreme Court of British Columbia upheld the right of the labour board to consider this evidence by striking down Mexico's petition to quash the blacklisting documents and testimony from former consular officials.

The charges and evidence are also well known to Canadian federal government officials who have followed the course of this case since the charges were first filed by UFCW Canada Local 1518 in 2011, on behalf of migrant agriculture workers who had voted to form a union at their BC workplace.

The blacklisting not only breaches BC labour laws forbidding reprisals against union activity, but is also a violation of the North American Agreement on Labor Cooperation (under NAFTA) to which Mexico is a signatory. The agreement calls for all parties to resolve to "protect, enhance and enforce basic workers' rights...encouraging employers and employees in each country to comply with labor laws and to work together in maintaining a progressive, fair, safe and healthy working environment."

Let us hope Prime Minister Harper also shares this position with Mexican President Enrique Peña Nieto at the upcoming Leaders' Summit in Mexico and asks him to stop the blacklisting. The challenges Mexican migrant and temporary workers in Canada face are hard enough without the further hardship of their own government reaching across Canada's border to violate their rights, Canadian law, as well as the NAFTA provisions Mexico is signatory to.