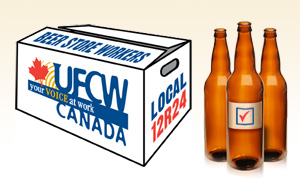 The scientific poll was conducted in late 2013 and surveyed 1,008 Ontarians 18 years of age or older. It is considered accurate within 3.1 percentage points, or 19 times out of 20.

The poll found that 76 per cent of Ontarians are satisfied with the province's existing system for selling alcohol, in which consumers can purchase alcoholic beverages at retail outlets such as The Beer Store, the Liquor Control Board of Ontario, and various producer-owned stores. A whopping 81 percent of Ontarians say there is currently enough access to alcohol in retail outlets, and 85 per cent are satisfied with the selection of brands available to consumers.

In addition to finding widespread support for Ontario's current approach to beer, wine, and liquor sales, the poll also found that most Ontarians oppose selling alcohol in corner stores. Approximately 66 percent of Ontario consumers are against the sale of beer, wine, and spirits in convenience stores, as a majority of those polled said corner store liquor sales would lead to increases in alcohol abuse and booze-related crimes in the province.

"This poll confirms what we have long known about Ontario's socially responsible approach to selling alcohol and consumers' satisfaction with The Beer Store, the LCBO, and other existing retail outlets," says UFCW Canada Local 12R24 President Robert Edwards. "Ontarians know that Beer Store workers keep alcohol out of the hands of minors and intoxicated individuals and protect our environment by recycling billions of beverage containers every year."

"The Beer Store also offers a huge production selection, and, through taxes on beer sales, generates hundreds of millions of dollars in revenue for the Ontario government," President Edwards adds. "For those reasons and others, Ontarians are satisfied with the current system for selling alcohol and they do not want to see beer, wine, and liquor sales in corner stores."