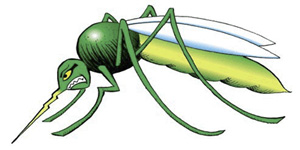 Is the cure more dangerous than the disease? When it comes to prevention of the mosquito-borne West Nile virus, many UFCW Canada health, safety and environmental activists will answer this question with a definitive yes — that is, if the contemplated cure is wholesale use of pesticides.

Mandated by provincial governments most cities across Canada have already administered larvicides such as metheprene on suspected mosquito-breeding sites (e.g., storm sewers and catch basins) in populated areas. Larvicides are chemicals in the form of pellets or briquettes designed to prevent the growth of mosquitoes from larvae to adults. They are purported to be safe for people and animals.

But now fueled by media hype some municipalities are contemplating more drastic measures still. In these instances, "fogging" populated areas with pesticides, or adulticides ike malathion, will be the weapon of choice. Adulticides are so called because they are designed to kill adult mosquitoes.

Scientist and broadcaster David Suzuki captures the thoughts of many who oppose these ‘weapons’: "To respond in this kind of sledgehammer way, I think it’s still probably way out of proportion."

Recently, even the Chief Commissioner of the Ontario Human Rights Commission has weighed in on this issue. In a letter to the Ministry of Health, the Commissioner states, "The Ministry as well as any municipality responsible for implementing the use of chemical insecticides, has a duty to provide accommodation to persons with environmental sensitivity. Failure to do so may contravene the Code."

Thus many are urging longer-term thinking. They point to several prevention alternatives that will not compromise our health or the health of our environment. Also, the West Nile virus isn’t likely to go away any time soon, especially in light of global warming. Climate change experts predict warmer winters, and hot dry summers in Canada. These weather conditions are ideal breeding grounds for exotic infectious diseases such as West Nile virus and malaria.

West Nile virus belongs to a family of viruses called Flaviviridae. It was first isolated in 1937 in the West Nile district of Uganda. The first recorded outbreak in North America took place in and around New York City in 1999.

In Canada, the virus was first discovered in birds in Ontario in 2001. The first human case was confirmed in 2002.

West Nile virus is spread to humans by the bite of an infected mosquito. Mosquitoes feeding on the blood of a virus-infected bird (e.g., crow, sparrow, or blue-jay) will themselves become infected. The most common species known to carry the virus is the Culex pipiens (northern house mosquito). Culex pipiens are largely urban and suburban mosquitoes most active at dawn and dusk. They like to hide in tall grass and brush near inhabited locations, such as houses and other buildings.

Culex pipiens breed in standing water, especially in water containing decaying organic matter (plant debris, animal wastes) found in tires, eaves troughs, wading pools, birdbaths, flowerpots, garden containers and barbecues. They are predominantly bird feeders. However, they have been known to bite humans and domestic animals when there are no birds around to bite. Culexes detect humans by sight (they observe movement), by detecting infrared radiation emitted by warm bodies, and by chemical signals (attracted to carbon dioxide, lactic acid and other chemicals).

About two weeks after the mosquitoes are infected they become capable of passing the virus to people and animals by biting them. West Nile virus is also spread to individuals through blood transfusions and organ/tissue transplants; breast milk; a pregnant mother to her unborn baby; and needlestick punctures or small cuts (laboratory workers handling infected specimens).

Many infected people have no symptoms and do not get sick. Others have only mild symptoms. When infection does cause illness, symptoms will usually appear within two to 15 days. The extent and severity of symptoms vary widely from person to person.

Based upon past experience, scientists report that typically less than one in 1,000 of individuals bitten by infected mosquitoes develop any clinical signs of disease and of those who do develop disease symptoms most do not develop the more serious symptoms of encephalitis. However, up to 10 per cent of those who actually develop encephalitis may die of the disease.

Some individuals have weaker immune systems and are therefore at greater risk of developing more severe symptoms and health effects such as meningitis and encephalitis. These conditions can be fatal. In such cases symptoms can include: severe headache, high fever, neck stiffness, vomiting, drowsiness, confusion, coma, muscle weakness and paralysis.

Because the virus is an emerging disease, the long-term effects are not fully understood. But some studies show that sustained health problems are possible. They can include physical issues (long-term muscle weakness paralysis), and cognitive effects (confusion, depression, memory loss). Scientists do not know why some people recover while others do not.

The risk of becoming infected with West Nile virus peaks during mosquito season (mid April to late October), although concern for exposure runs highest between late July and early August. Scientists say it takes this long for the virus to build in bird populations. The good news is mosquito populations are on the wane by then. Thus the odds of being bitten by a virus-infected mosquito are relatively low. Of the few individuals bitten, only about 20 per cent will develop mild flu-like symptoms. Less than one per cent will develop serious illness.

Regardless, human exposure is greater for those in areas where the virus has been detected. When it comes to workers, outdoor workers, handlers of dead birds or animals, laboratory and poultry slaughterhouse workers, or those working in close proximity to sites near stagnant pools, ponds, watering troughs, irrigation ditches, and rain barrels are perhaps at greatest risk. Many of these workers are UFCW Canada members.

Putting things into further perspective, some 60,000 Canadians die of cancer each year and another 2,000 die of influenza. Meantime, Canada’s compensation boards recognize annually some 900 worker deaths in total, while even the most conservative estimates peg mostly "unrecognized" (or to put it another way, uncompensated) occupational cancer deaths at approximately 5,500 each year.

Also consider, pesticides such as the adulticide, malathion pose the very real risk of chronic health effects. (As we will see below widely prescribed, DEET-containing bug sprays are also not without risk.)

For example, pesticides can affect a large number of adults and children with respiratory problems or environmental illness. Malathion is advertised as one of the most harmless of organophosphate pesticides, but it has been linked to birth defects, increased asthma rates, attacks to the nervous system, childhood leukemia, and endocrine disruption. At very high levels this adulticide may also cause paralysis or death.

As well malathion negatively impacts the environment. While it is designed to kill mosquitoes, it also kills bees and moths. This could adversely affect the delicate balance of our eco-systems with yet unknown consequences.

Although the risk is small, action is warranted. Like any hazard, West Nile virus is best dealt with at the source. (While eliminating global warming is beyond the confines of this bulletin, eliminating mosquitoes before they mature or before they reproduce is not.) This is accomplished by eliminating sources of standing or stagnant water — the prime breeding place of disease-carrying mosquitoes. The following are examples of what can be done:

Some are also promoting a soil bacterium, known as Bti (Bacillus thuringiensis israelensis) as a natural and safer larvicide. Apparently it doesn’t harm humans, pets, fish or birds, but may be harmful to other species of insects.

Mosquitoes not eliminated at their source, should be prevented from entering the work or living area. Ensure all windows and doors are covered with screens in good condition to keep mosquitoes outdoors. Clip tall grass or weeds standing near workplace buildings, schoolyards, and parks. Gadgets like mosquito magnets (attract and destroy mosquitoes by emitting carbon dioxide, heat and moisture); electric Bug Zapper (draws mosquitoes to a blue light and kills them); or outdoor, yellow "bug" lights are also helpful to keep mosquitoes at bay.

Laboratory workers handling specimens should use universal precautions for blood and body fluids as when working with other infectious diseases.

Employers can help protect other workers by scheduling outside work to avoid dawn, dusk and early evening hours. Outside work is also best undertaken when it is cool, windy or sunny. Workers should also wear protective clothing such as long sleeved shirts and full-length trousers. In some instances, it may be necessary to insist upon employer-supplied bug suits (made of mesh materials with elasticized cuffs and hoods); and mosquito netting over hat (protecting head, face and neck).

Health Canada recommends the use of insect repellants with DEET. But there are also non-DEET repellants on the market containing user-friendly citronella, lavender or eucalyptus oils, Avon’s Skin-So-Soft bath oil, and soybean oil. Scientists are also experimenting with a component in tomatoes called IBI-246, piperdine found in black pepper and catnip all thought to repel mosquitoes.

Finally, all workers who are at risk of exposure to mosquitoes should receive hazard training on West Nile virus, and its control. Contact your UFCW Canada Local or the UFCW Canada National office for information on education programs offered.

DEET is the common name for N,N-diethyl-meta-toluamide. DEET-based products are designed to control biting insects and ticks. DEET disrupts the ability of biting insects to detect the source of carbon dioxide, which is what attracts mosquitoes and other insects to us. Insects aren’t killed by DEET; they just can’t locate their prey for a period of hours.

Health Canada, the World Health Organization and Centers for Disease Control and Prevention in the U.S. recommend DEET-based repellants as safe for humans. But they strongly urge consumers to follow manufacturers’ directions. The Environmental Protection Agency (EPA) in the U.S. says DEET products are intended only for "spare and infrequent use."

Adults should not use products containing more than 30 per cent DEET. Children should not be given repellants with over 10 per cent. And it should never be used on pregnant women or infants. DEET should not be applied directly to hands, face or on broken skin. It should not be used under clothing. All treated areas of skin should be washed with soap and water after returning indoors.

In rare cases, use of DEET has been associated with both dermal and neurological reactions in humans, affecting the central nervous system. According to 1998 findings by the EPA, exposure to concentrations of as little as 15 per cent or less have resulted in acute health problems, including encephalopathy, with symptoms of weakness, disorientation, seizures and in rare cases death.