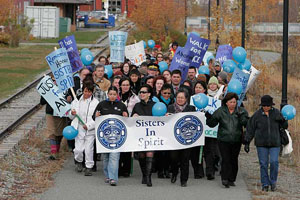 Ottawa – October 3, 2013 – Canada’s leading union, UFCW Canada, has joined labour and social justice activists from across the country in signing the Native Women’s Association of Canada’s (NWAC) joint statement to demand government and community action on more than 600 ‘known’ cases of missing and murdered Aboriginal women and girls in Canada.

On October 4, the joint statement will be read aloud by thousands of people at Sisters in Spirit vigils across Canada.

Sisters in Spirit vigils honour the lives of missing and murdered Aboriginal women and girls, and support families who have been tragically touched by the loss of a loved one to violence. Vigils take many forms: a rally, a candle-light vigil, a workshop, a moment of silence, a walk, or a gathering of people to share memories. UFCW Canada members can participate in an existing vigil or create their own Sisters in Spirit vigil.

All UFCW Canada activists are encouraged to support the joint statement by attending or organizing a vigil in their communities.

The 2013 Joint Statement specifically calls for “all levels of government to work with Aboriginal women and representative organizations.” It also announces that 10,000 signatures have been gathered so far to support a call for a National Public Inquiry.

The NWAC petition for a national inquiry was launched as part of October 4th Vigil activity one year ago in 2012. The signatures will be presented to the Federal Government on the National Day for Action on October 18th 2013.

Now is the time to come together and demand action. When we show we are a united front, all levels of government will listen.