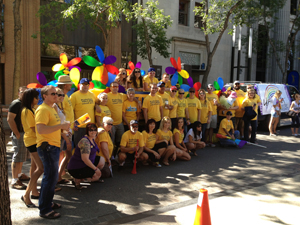 Calgary – September 6, 2013 – UFCW Canada Local 401 recently participated in Calgary’s most successful PRIDE parade to date. Float entrants in the parade rose to 80 from approximately 60 in 2012. And while final numbers are not yet confirmed, initial reports indicate that the event drew even more Calgarians than last year’s 30,000 attendees.

Participating for the seventh year in a row, more than 40 Local 401 activists came out to express their support for Calgary’s LGBTQ community and voice UFCW’s support for universal human rights.

“It’s great to see just how big the Calgary Pride Parade has gotten,” says Local 401 Secretary-Treasurer Theresa McLaren. “UFCW 401 has long believed that sexual orientation is a human right that must be protected both inside and outside of the workplace. We’re proud to stand with our LGBTQ brothers and sisters today and every day!”

The Local 401 float featured a live DJ playing various popular songs as union activists engaged attendees. It didn’t take long before the entire parade route was lined with UFCW 401 flags that activists were handing out.