Toronto – July 31, 2013 – UFCW Canada is giving migrant workers and their families hope for a better future through the 2013 Migrant Workers Scholarship program, which offers twenty $500 union scholarships to the family members of migrant workers.

The twenty recipients of the 2012 UFCW Canada Migrant Workers Scholarship are a diverse group of young people from the Global South, ranging in age from six to twenty-four years old. They are attending school in Guatemala, the Philippines, Jamaica, Sri Lanka, Kenya, El Salvador, and Mexico. The winners’ family members are Temporary Foreign Workers who work on farms, in food processing plants and grocery stores, and as live-in caregivers in Canada.

Directions is currently profiling the winning children and their families and sharing their compelling stories with UFCW Canada members and our social justice allies. 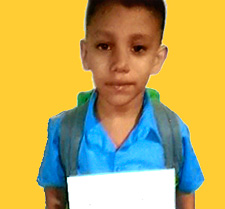 Yensi is thirty-two years old. She came to Canada from El Salvador in September 2012 and works at Maple Leaf Foods in Manitoba. She is a member of UFCW Canada Local 832.

Yensi was unemployed in El Salvador and wanted to find better opportunities for herself and her family, so she decided to come work in Canada. She believes that the agreement between El Salvador and Canada offers a new start for families in her home country. Having the chance to work and eventually obtain permanent residency in Canada is something that many people in El Salvador aspire toward. "Being away from my family is a sacrifice, but I am very satisfied knowing that I am providing for them," Yensi says.

She nominated her cousin Kevin Gerardo Hernandez for a UFCW Canada Migrant Workers Scholarship. Kevin is seven years old, is currently in the first grade, and lives with his mother, sister, and grandmother in El Salvador. He plans to use the union scholarship to buy school materials and shoes and pay for his tuition fees. Kevin says that the Migrant Workers Scholarship will be a great help to him because his mother is a street vendor and it is very hard for her to afford the school supplies that he requires.