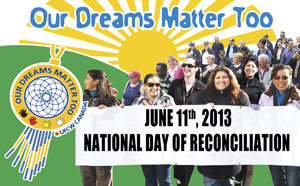 Toronto – June 5, 2013 – Activists are gearing up for UFCW Canada's Walk in Support of First Nations Children on June 11th, the National Day of Reconciliationwith Aboriginal communities.The event is part of the Our Dreams Matter Too Campaign, an initiative that is being led by UFCW Canada's national partner, the First Nations Child and Family Caring Society of Canada (FNCFCS).

Walk participants will be honouring the National Day of Reconciliation with the simple message that the dreams of First Nations children matter. Participants will be meeting at 12:30 P.M. in the main lobby of UFCW Canada's National Office at 61 International Boulevard in Toronto. The eventorganizers will be handing out posters to those who wish to carry one and UFCW flags will be on hand as well. At the beginning of the walk, participants will sign a letter asking Government Boss Stephen Harper to restore justice and culturally-based equity to First Nations children.

"By taking part in this exciting walk, UFCW Canada activists intend to show that we believe First Nations children should be afforded every right to succeed while having their cultures and languages respected," says UFCW Canada National President Wayne Hanley. "We're sending a message that it's time for the Harper Government to give meaning to its Residential School Apology by ensuring that First Nations children receive equal access to health care and education, as well as the ability to practice their culture and heritage without discrimination."

More information about the Our Dreams Matter Too Campaign can be found on the FNCFCS website. As well, if you are interested in taking part in the walk please RSVP by contacting Rehya Yazbek of the Human Rights, Equity, and Diversity department at [email protected] or by telephone at 416-675-1104 ext. 2264. At present we have roughly 40 people participating.