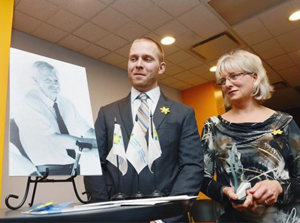 Regina, Sask. – April 19, 2013 – Labour activists across Saskatchewan are celebrating the unanimous passage of Bill 604, Howard’s Law, by the Saskatchewan legislature on Thursday April 18.

The Bill, originally called the Asbestos Right to Know Act, is a mandatory asbestos registry of public buildings. The new law is named for Howard Willems, a food inspector for the CFIA – and labour activist with PSAC – who contracted mesothelioma after being exposed to asbestos while doing his job to keep the public safe. Unfortunately, Howard passed away shortly after the Bill was introduced by NDP Opposition Leader Cam Broten. Broten was also responsible for changing the Bill’s name to Howard’s Law.

“Howard used the last months of his life to give voice to past and future victims and to make our Legislature realize that information is a powerful tool when it comes to protecting health and safety,” said Broten.

“Howard was a unionist who cared for everyone’s health and safety,” says UFCW Canada Local 1400 President Norm Neault, who was a personal friend of Howard Willems. “Thanks to Howard’s efforts, public workplaces in Saskatchewan are now safer for the public and the people who work in them. Howard’s Law will reduce exposure and save lives.”

Saskatchewan is the first Canadian province to have a mandatory asbestos registry.