Canadians throw away 1.7 disposable diapers every year. Canada consumes 65,000 tons of pulp, 8,800 tons of plastic and 9,800 tons of packaging material according to Environment Canada.

Canada ranks fourth highest in terms of per capita consumption of electricity, approximately 17,000 kWh per year according to statistics from World Bank Organization. The good thing is that most of the electricity comes from non-emitting sources, particularly by exploiting the hydroelectric potential. Only 18.1 percent comes from fossil fuels; whereas the US gets half of its power from emitting sources and China around 80 percent.

According to World Bank statistics, Canada has 607 vehicles for every 1,000 people. Although behind the Netherlands Antilles (1214 vehicles per 1,000 people), and the US (820), Canada’s use of automobiles is still big enough to be a significant source of greenhouse gas emission.

According to Environment Canada, from 2002 to 2008, municipal solid waste disposal increased slightly from 769 kilograms to 777 kilograms per capita. By weight, organic materials accounted for the largest proportion of waste diversion (29%); followed by cardboard and boxboard (17%), and newsprint (13%).

A single spam message produces the equivalent of 0.3 grams of carbon dioxide. 62 trillion spam emails are sent each year! 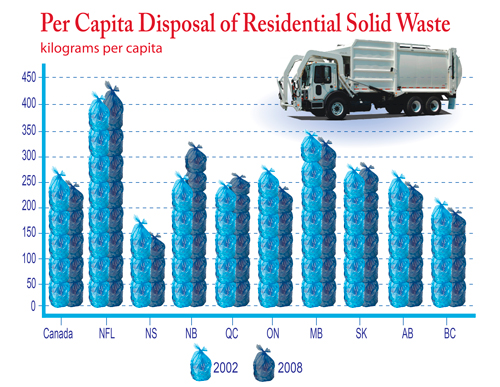