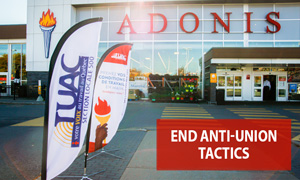 Montreal – November 1, 2022 – The United Food and Commercial Workers Union, Local 500 (UFCW 500), which has been fighting for the respect and recognition of the rights of grocery store workers for the past fifty years, is pleased with the decision of the Administrative Labour Tribunal ordering the Adonis Group, owned by Metro, to stop interfering with and obstructing the unionization process underway at the Adonis market in Anjou.

In his decision rendered on October 26, 2022, Judge Jacques David also ordered the employer and its representatives to stop using intimidation tactics, notably by gathering in front of the store as was the case last October 24. He also ordered that his decision be posted in a place clearly visible to all employees.

"Adonis Group seeks at all costs to maintain working conditions well below those existing in the other Metro banners it has owned since 2017. Especially since Adonis employees offer a more personalized service than elsewhere, it is time that Adonis offers truly decent working conditions to its workforce, which is mostly first and second-generation immigrants who feel highly precarious," says Nil Ataogul, UFCW Canada's Quebec Organizing Coordinator.

UFCW 500 President Antonio Filato said he was very pleased with the decision of the Administrative Labour Tribunal judge, as it tells the Adonis Group and Metro that they cannot be permitted to use anti-union and repressive tactics with impunity. "This decision reaffirms that workers' voices are important and that the choice to unionize is theirs alone."

With some 30,000 members in more than 500 companies, UFCW 500 is the largest food and commercial union in Quebec. Our extended organization has over 45,000 members in Quebec, 250,000 in Canada and over 1.3 million in North America. Our members work in all areas of the food industry and commerce, as well as in other areas such as service, processing, manufacturing, and technical and professional activities. As Canada's most influential and progressive union, UFCW Canada is the country's most innovative organization working to advance justice in workplaces and communities. To learn more about the UFCW 500, visit www.tuac500.com.