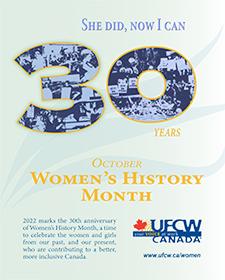 Toronto – September 3, 2022 – 2022 marks the 30th anniversary of Women’s History Month – a time to celebrate the women and girls from our past, and our present, who are contributing to a better, more inclusive Canada. During this month, we commemorate the countless ways women contribute to our union and our society and recommit ourselves to achieving substantive equality for all women.

This year the theme is She Did, So Now I Can, which celebrates the actions of inspiring Canadian women that positively impact our lives today, right now, at this very minute. This month, we work to honor women who don’t accept the status quo and fight hard to improve the lives of all women.

In 1992, October was proclaimed Women's History Month to acknowledge and celebrate the achievements of women throughout Canadian history.  The month was chosen to coincide with anniversary of the Persons Case, which on October 18, 1929 – through the courage and determination of the Famous Five, the five Canadian women who launched the case – established once and for all that women were "persons" when the Privy Council overturned a Supreme Court of Canada decision and ruled that women were indeed persons and could become Senators. Though this decision did not include all women, such as Indigenous women and women of colour, it did mark critical progress in the advancement of gender equality in Canada. This day is commemorated on October 18 every year as Persons Day.

While the roles and opportunities for women have advanced over the past 30 years and more, the fact remains that gender-based assumptions and discrimination continue hold women back. Women continue to earn less than their male counterparts in many non-unionized workplaces, and secrecy about pay practice help mask gender and racial gaps. Participate in UFCW’s Help Close the Gender Wage Gap campaign and tell your elected official to support Pay Transparency Legislation and more: Help Close the Gender Wage Gap

To learn more about how UFCW Canada is advocating for women workers across Canada, go to UFCW.ca/women.