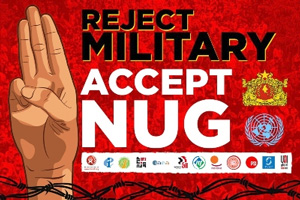 Toronto – September 23, 2022 – Alongside comrades of the UNI Global Union and international trade unionists, UFCW Canada denounces the military coup of February 1, 2021, which illegitimately took power from the National Union Government (NUG) in Myanmar setting off a bloody military junta.

Since the coup that toppled Myanmar’s democratically elected government the military junta has killed more than 2,000 civilians, including trade unionist and children, arrested more than 14,000 and displaced more than 1 million people.

This must stop and all conscientious citizens should stand with the Council of Global Unions (CGU) in calling on the 77th Session of the United Nations General Assembly to condemn the military junta by enforcing an arms embargo, adopting credentials of the NUG, and holding the military junta accountable before the International Criminal Court, among other recommendations.

To learn more about the atrocities unfolding in Myanmar and how to support a peaceful resolution to the conflict, click here.