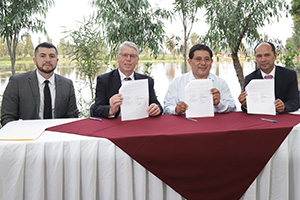 The pilot project involves migrants participating in the Seasonal Agricultural Workers Program (SAWP) – a long-standing bilateral arrangement between Mexico and Canada and subset of the Temporary Foreign Workers Program (TFWP) – and aims to demonstrate the critical role that proper representation serves in keeping migrants safe at work and free from the abuse of exploitative and irresponsible employers.

The pilot project involves governments in Mexico partnering with UFCW to have safety, health, and labour rights training delivered by union activists to migrants before, during and after their work term in Canada. Once in Canada, migrants and UFCW are connected in the field, with the union providing advocacy supports and solidarity building opportunities. The project is based in Leamington, Ontario: the epicentre of Canada’s greenhouse sector and where UFCW maintains a bricks and mortar Agricultural Support Centre located at 14 Albert Street.

This latest initiative by the union is part of more than 30 years of UFCW Canada advocacy on behalf of migrant farm workers. Despite long-standing efforts by the union and civil society organizations, successive federal and provincial governments have failed to reform Canada’s migrant labour regime to allow for proper representation, resulting in the widespread precarity and vulnerability that has characterized the system for decades.

Supporting the need for proper representation, governments in Mexico are encouraging migrants to see UFCW as an ally and advocacy resource while in Canada. Central to the Migrant Workers Representation Pilot is the union’s support of the Mexican governments’ campaign of leave safe, comeback safe: focused on making sure that migrant workers return home free from workplace injury, stress, and health complications.

The pilot comes as relations between Canada’s food workers’ union and the Mexican government reach an all-time high with the North American country looking to collaborate with leading advocates to help represent and protect the well-being of their citizens. The Migrant Workers Representation Pilot will run from August 2022 to October 2024 with results tracked by Pollara Strategic Insights. Between now and then, UFCW Canada will be publishing Report from the Fields to provide the latest news and updates on the pilot and its progress (sign-up here).