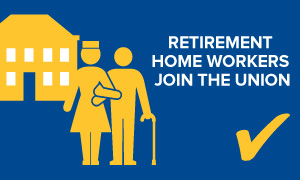 Saint-Jean-de-Matha, Que. — August 12, 2022 — Workers in the Lanaudière region have expressed their interest in organizing with the United Food and Commercial Workers Union Local 1991-P (UFCW 1991-P). Indeed, the sixty or so beneficiary attendants of the Résidence Le Grand Manoir located in Saint-Jean-de-Matha have decided to unite their voice with the thousands of members in some twenty residences for seniors who are represented by the UFCW in Quebec. The certification petition filed on June 12 was approved on July 8, 2022, by the Tribunal administratif du travail (TAT).

It is with great pride that UFCW 1991-P President Mario Maisonneuve welcomes this new group to our union.

“We are very pleased that the workers at this independent and semi-independent seniors' residence and nursing home have chosen UFCW 1991-P to represent them. By choosing to join an international union that stands out for the quality of its personalized service, this new group is paving the way for their colleagues in other seniors' residences who wish to improve their bargaining power. In this way, they will have the chance to protect their working conditions as much as possible while having the opportunity to negotiate with their employer.”

Now that the union certification will be issued by the TAT, new UFCW 1991-P members will be able to begin negotiating a collective agreement to improve their wages, protect seniority and working conditions. Their membership will improve the bargaining power of all the workers we represent in the seniors' residence sector.

UFCW Local 1991-P represents over 6,000 members in more than 60 companies in Quebec. To learn more about UFCW 1991-P, visit the Local Union’s website.