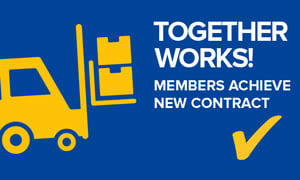 “The company low-balled in the beginning but came around after the committee applied pressure and insisted on better wage increases and other improvements,” says Relief Union Representative Matt Gilks. “The praise goes to the hardworking bargaining committee and the solidarity on display by the entire membership.”

Upon ratification members will see 2.5 percent retroactive pay applied to all hours worked since contract expiry, in addition to a 9 percent increase to wages throughout the three-year deal. Members also secured quarterly labour-management meetings to address driver’s issues, higher start rates for engineers and mechanics, in addition to member’s joining the NDF for added security in the event of any future labour disputes.

To read more about the collective bargaining victory at Sobeys, click here.