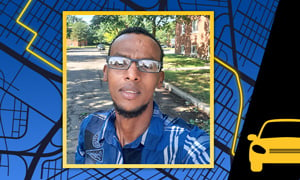 Ottawa – July 25, 2022 – Another victory has been achieved through UFCW’s advocacy for drivers and delivery people on the Uber platform, this time involving an Uber Eats courier who was deactivated without being able to explain his side of the story.

Ottawa-based bicycle courier Mouktar Abdillahi Mohamed was shocked to see his Uber Eats account terminated after a customer complained to the company following a discrepancy over a food order he delivered.

Mouktar insists he did nothing wrong in the matter, and so he decided to reach out to UFCW Canada for representation. As an enthusiastic courier who just wants to make a living, Mouktar was taken aback by the unfair treatment he received, and he was surprised that he was not able to share his view on the issue before the deactivation.

That’s until UFCW Canada got involved, at which point Uber investigated the issue and decided to give Mouktar another chance.

“I am thankful for UFCW Canada's help and leadership with my case, as my account is now reactivated. The union is very amicable and it’s clear that they do their best to protect drivers and delivery people,” he says.

In the wake of UFCW Canada’s historic agreement with Uber Canada, reached earlier this year, drivers can now access representation services from UFCW Canada to assist with account deactivations, licensing issues, background checks, and other matters.

To learn more about the benefits available to Uber drivers via UFCW Canada representation, visit our website for drivers and delivery people on the Uber platform.