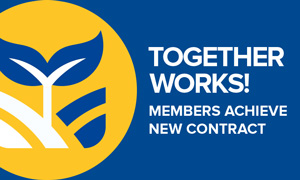 Elma, Man. – March 18, 2022 – UFCW Local 832 members working at SunGro Horticulture have achieved a new collective agreement that increases wages by up to 58 percent.

“These workers were in desperate need of union representation,” says UFCW 832 Union Negotiator Joe Carreiro. “The SunGro contract is a clear example of the difference union membership can bring to workers who are neglected by their employer.”

The horticulture lab members worked alongside UFCW 832 members from other areas of the Elma facility but were previously left out of the union’s scope of representation, leaving them vulnerable and neglected at work.

They became fed up feeling left out and left behind as their unionized co-workers were improving their wages and working conditions. So they decided to organize and establish a collective agreement of their own. In their first contract, they managed to substantially increase wages and improve their conditions of employment.

To read more about the collective bargaining victory at SunGro Horticulture, click here.