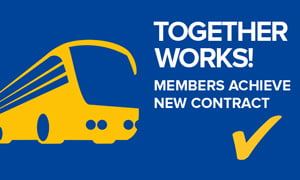 Winnipeg – January 31, 2022 – Bus drivers at Winnipeg 1 School Division recently secured a new three-year collective agreement that provides a cost-of-living adjustment (COLA) in year one, in addition to a 2.75 percent increase in the following years.

“We’re proud of our negotiating committee and what they were able to accomplish during this round of bargaining,” says UFCW 832 Negotiator Phil Kraychuk. “As a labour movement we’ve been pushing back on the PC government’s wage mandates and through our combined efforts we’ve been able to get a fair deal.”