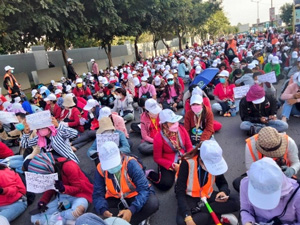 Toronto – January 25, 2022 – UFCW Canada is in solidarity with striking union members of the Labor Rights Supported Union of Khmer Employees of NagaWorld (LRSU) in partnership with the International Union of Food and Allied Workers (IUF).

Eight union leaders were jailed for protesting management’s actions which resulted in the forced redundancy of 1,300 hotel and casino workers and management’s refusal to negotiate in good faith leaving thousands destitute.

Despite the workers peaceful protests their picket lines were violently attacked by police with LRSU President Sithar Chhim arrested and jailed. Mr. Chhim and seven other activists were charged with offences that carry upwards of five years in prison.

UFCW Canada expresses solidarity with the workers engaged in this important struggle for trade-union rights and calls for the immediate release of all detained activists. To show your support, click here.

To find out more about LabourStart campaigns, click here.