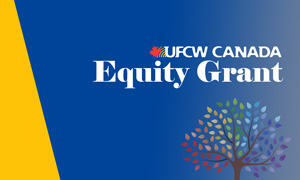 Toronto – December 16, 2021 – This year’s recipient of the UFCW Canada Equity Grant has been awarded to UFCW 175 & 633 union member dependent Janet Tang and will go toward supporting the work of Bridging the Generational Gap (BTGG).

“With the generous support of UFCW Canada, what started as just an idea is now making an impact at the national level,” says Janet Tang, BTGG Co-founder. “This would not have been possible without UFCW Canada, and we sincerely cannot thank them enough.”

BTGG’s mission is to facilitate meaning intergenerational relationships between seniors and youth through friendly calls and greeting cards. To learn more about BTGG watch the video below and visit their website at www.bridgingthegenerationalgap.com.

The UFCW Canada Equity Grant program is now officially open for its second year. For details on how to apply for a 2022 UFCW Canada Equity Grant to support an existing or new community-focused initiative, visit ufcw.ca/equitygrant. Applications will be accepted until May 1, 2022 under the following 3 streams: Human Rights, Community Action, and Newcomer/Immigration streams.  UFCW members and/or community allies are encouraged to apply!