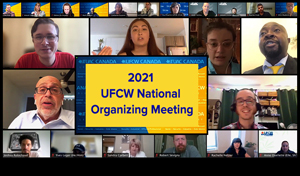 Activists learned that UFCW Canada’s growth agenda has remained undeterred by the COVID-19 pandemic, with thousands of workers choosing to join Canada’s best union for better workplace protections in these uncertain times.

“We should be proud that UFCW Canada has not only weathered this pandemic, but has also found new ways to innovate while helping thousands of workers join the union,” UFCW Canada National President Paul Meinema told conference attendees. “Thanks to the ingenuity and perseverance of UFCW organizers, we are well-positioned to come out of the coronavirus era stronger and more capable than ever.”

Organizers convened virtually from nearly every province in Canada to share experiences from current and past organizing campaigns. The use of digital cards, text messaging applications, and the crucial role of social media in winning organizing campaigns were shared by engaging panelists who took questions and responses from participants.

Special guests from the UFCW International Union shared stories of inspiration that led to a historic election in Alabama, where Amazon workers defied company pressure and secured a union vote to join the Retail, Wholesale and Department Store Union (RWDSU). UFCW Executive Vice President and RWDSU President Stuart Appelbaum spoke about the strategies activists drew upon to mobilize Amazon workers in the southern state, including attracting messages of support from U.S. President Joe Biden.

Conference goers also heard from RWDSU organizer Adam Obernauer, who discussed potential next steps in the campaign as Amazon workers continue to fight for dignity and respect on the job. As well, UFCW Digital Organizing Coordinator Rachelle Netzer explored various initiatives where digital organizing tools are empowering more workers to join the union.

As Canada’s leading union, UFCW Canada is committed to helping workers across the country gain the union advantage and build a better life. To learn more about this important work, visit UFCW Canada’s Join the Union website.