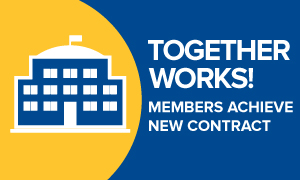 Virden, Man. – July 2, 2021 – After two long days of bargaining, UFCW 832 members working at the Town of Virden ratified a four-year collective bargaining agreement that provides major gains for members and their families.

“This bargaining committee put in long hours to secure this deal,” says Phil Kraychuk, UFCW 832 Negotiator. “The end result is an agreement with much-deserved wage increases for members.”

The Town of Virden is located on Highways #1 and #83 in southwestern Manitoba. UFCW 832 members who work at the municipality are employed in public works and at the town’s recreation facility. In public works, members look after the water and garbage, cut grass, plant flowers, and grade roads. In the recreational centre, members maintain the skating rink, outdoor pool, and all town parks.

To read more about the new union contract at the Town of Virden, click here.