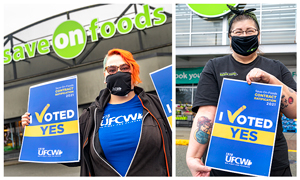 New Westminster, B.C. – February 24, 2021 – Thousands of UFCW 1518 members at Save-On-Foods across B.C. voted overwhelmingly in favour of ratifying their new three-year contract, bringing in many important improvements for thousands of workers.

“Our members have told us that these wage increases are life-changing,” said UFCW 1518 President Kim Novak. “With this new contract, Save-On-Foods members are helping to set a new standard for the grocery industry in British Columbia, bringing thousands of workers closer to a living wage. And these increases are here to stay – they are not temporary through the pandemic.”

The wage increases that the new contract ushers in will put newly hired Save-On-Foods workers far ahead of B.C.’s minimum wage, with starting rates beginning in June 2021 at $16.20 per hour.
Union members already making the top rate at Save-On-Foods will receive lump-sum payments as high as $2,750 by April 2021 and will receive a wage increase next year before the contract expires in 2023.

“The members really drove this agreement,” said Bargaining Committee member Erica Jones. “We consistently heard that broad wage increases for the lowest-paid Save-On-Foods members were the top priority, so that is what we fought for at the bargaining table.”

Save-On-Foods members ratified the new contract in the highest voter turnout in the union’s history.