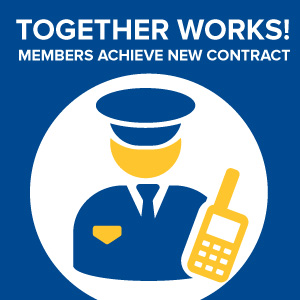 In addition to the health and welfare improvements, these security guards in the National Capital Region will receive wage increases of between $1.27 and $2.44 per hour with Consumer Price Index (CPI) increases each subsequent year.

"We are getting calls every day from Commissionaires in Ontario. Since the beginning of the pandemic, they have been at the front line and continually overlooked for their steadfast contributions to public safety," says Jon O'Connor, UFCW 333 Vice President.  "We are looking forward to continuing our hard work of organizing and bargaining for better treatment of these committed members in Ottawa and the Capital Region.”

Since 1925, the Commissionaires have been mandated to provide meaningful employment that meets the needs of veterans of the Canadian Armed Forces, the Royal Canadian Mounted Police, their families, and others who wish to contribute to the security and well-being of Canadians.

The Corps of Commissionaires in Ottawa are the Government of Canada's first choice to provide security services to federal facilities. UFCW Local 333 represents hundreds of Commissionaire Security Guards in Ontario and across Canada.