UFCW Canada joins allies in honouring Have A Heart Day 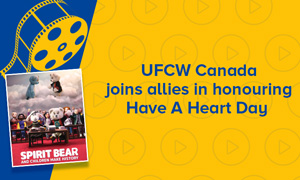 Toronto – February 16, 2021 – In partnership with the Mississaugas of the Credit First Nation and the First Nations Child and Family Caring Society, UFCW Canada hosted a screening of the animated film "Spirit Bear and the Children Make History."

Following the screening, each member shared their voice on what reconciliation means to them.

The event was opened by Chief Stacey Laforme with a traditional land acknowledgment and poem entitled "Spirit Bear."

An update was provided by Emily Williams of the Caring Society surrounding the Canadian government’s non-compliance with the 2017 ruling by the Human Rights Tribunal which found the government discriminated against First Nations children when delivering child welfare services like health and education.

To learn more about our union's work on reconciliation, read UFCW Canada's Our Commitment to Reconciliation 2021 Report.