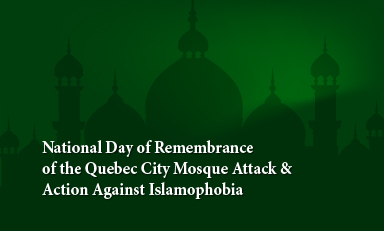 This year will mark the sixth anniversary of that tragic night that changed our country - and the second National Day of Remembrance of the Quebec City Mosque Attack and Action Against Islamophobia.

January 29 serves as a reminder of the work we must do to eradicate Islamophobia, hate and racism in Canada. Learn more below about ways you can support.

Support UFCW Canada’s #StoptheHate campaign. One of the actions in this campaign calls on the federal government to use an inter-ministerial and inter-jurisdictional approach to support the work of the Anti-Racism Secretariat in combatting Islamophobia and intersecting oppression. Sign the petition now at www.ufcw.ca/stopthehate.

In the workplace, this day of remembrance is also an opportunity to familiarize ourselves with UFCW Canada Anti-Islamophobia resources, created in partnership with the NCCM:

My Rights To Religious Accommodation at Work - Action Card #1

On this date, and everyday let us continue to support organizations leading this fight and continue to affirm our solidarity with Muslim communities across Canada.