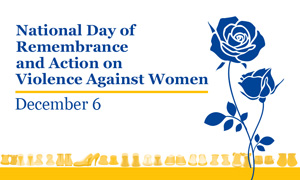 Toronto – December 3, 2020 – Each year on December 6, the National Day of Remembrance and Action on Violence Against Women, we mourn the loss and honour the memory of the 14 women students at Montreal’s École Polytechnique, who in 1989 were viciously murdered by a lone gunman simply because they were women.

The National Day of Remembrance and Action on Violence against Women is about acknowledging women who have experienced gender-based violence and remembering those who we have lost as result of such violence. The day is also a time to act and reaffirm our commitment to fight the misogyny that led to the École Polytechnique tragedy and that still exists today.

In Canada and around the world, women and girls continue to face unacceptable violence and discrimination, and gender-based violence and harassment have been amplified by the COVID-19 pandemic. These forms of violence can range from verbal and psychological harassment, to unwanted touching, to physical and sexual assault.

Many women are also harassed online, where they can be subject to gender-based cyberviolence. For example, young women in Canadaare more likely than other internet users aged 15-29 to have experienced both cyberbullying and cyberstalking, according to Statistics Canada.

Urgent action is needed on this issue because sexual harassment and violence can have serious consequences on women's physical, emotional, and mental health, as well as their work performance.And that is why the National Day of Remembrance and Action on Violence Against Women is so important.

December 6 falls within the 16 Days of Activism against Gender-Based Violence, held every year between November 25 and December 10. During this period, UFCW Canada is encouraging members, activists, and allies to be a part of the conversation on social media by sharing ways in which you are fighting to end gender-based violence, using the hashtag #16Days.

Activists are also encouraged to read and share the Canadian Women Foundation’s “Facts about Online Hate and Cyberviolence Against Women and Girls in Canada,” which explains actions that you can take if you are experiencing and/or observing someone being subjected to cyberviolence or online hate.