Retail workers at Indigo bookstore in Mississauga join the union 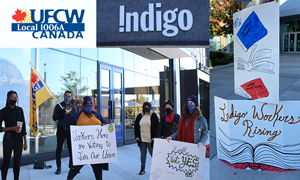 Mississauga, Ont. – September 26, 2020 – UFCW Local 1006A would like to congratulate workers at the Indigo Square One bookstore in Mississauga on their campaign to win union representation. The retail workers were supported by authors, community leaders, and shoppers, who encouraged them through social media with their unionization effort.

“We are just trying to create a fairer workplace and better working conditions for everyone here at the store,” said Jennifer, an Indigo worker.

"The success we had today makes me hopeful – the employees at Indigo Square One have shown they are willing and ready to put in the effort needed to create a work environment where everyone is valued."

“The unity and determination of the Indigo workers inspired many Canadians,” says UFCW 1006A President Wayne Hanley. “The workers saw an outpouring of support from across the country, from writers, activists, and community leaders. We are so proud and excited to welcome the new members from Indigo and we look forward to working with them on this next chapter with UFCW.”

“The Indigo workers were incredible in coming together for fairness and respect,” says Lesley Prince, UFCW 1006A's Director of Organizing. “They led this campaign from beginning to end, with passion, creativity, and commitment.”

The Local Union says the next step is negotiating a strong union contract that addresses the concerns of the approximately 40 workers at this location. To read more about the union victory at the Indigo bookstore in Mississauga, click here.