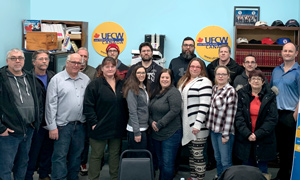 Held at the UFCW Local 1288P office in Moncton, the training session featured an engaged group of new stewards and focused on conducting investigations and filing grievances. Participants also learned about how they can become more involved in their union and the labour movement as a whole.

“Stewards training is an important way of engaging union activists and equipping them with the tools needed to effectively advocate on behalf of members,” says Walsh, who conducted the session. “Some of the participants even committed to becoming more active in their local labour councils, which is great to see,” he adds.

As the representative body of UFCW Locals 864, 1252, and 1288P, the UFCW Canada Eastern Provinces Council represents thousands of workers across Atlantic Canada. To learn more about the UFCW EPC and its outstanding work, visit the Council’s website.