UFCW 1518 wins wage increase for all MEC locations in B.C. 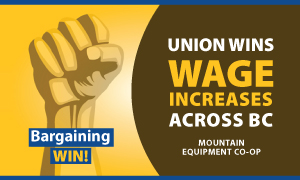 Vancouver – January 10, 2020 – The union that organized Mountain Equipment Co-op (MEC) workers in Vancouver and Victoria has won improvements for all MEC employees across British Columbia.

“Because workers at MEC in Vancouver and Victoria voted to join a union, employees in all B.C. locations will receive another wage increase effective immediately,” says UFCW Local 1518 President Kim Novak.

“We are very proud of the work of our bargaining committee, as well as the commitment and solidarity of MEC workers,” says Novak. And this isn’t the first time that the union’s advocacy paid off for all MEC staff – not just those who belong to UFCW 1518, she added. “Barely two weeks after workers at the Vancouver flagship location voted to join our union, MEC announced wage increases to all MEC employees across Canada. That’s power.”

UFCW 1518 Secretary-Treasurer Patrick Johnson said the union is pleased to have a first contract in effect for the Victoria and Vancouver locations. "Not only did members keep the benefits they had, they have gained solid improvements. And MEC has implemented many of the same improvements, including a wage increase, to all MEC locations in B.C. - despite ongoing statements to the public crying the financial blues.”

Workers at the MEC Vancouver location voted to join UFCW 1518 last August, and while they were in negotiations for a first collective agreement, workers at the Victoria location also voted to join the union. This led to a better outcome for all staff at the bargaining table, Johnson comments.

"There is strength in numbers. And MEC certainly took notice when a second location voted to join our union – that’s why our members got the wage increase that they did,” he says. "We look forward to the opportunity to represent MEC staff in all B.C. locations so that workers continue to see even more gains.”

UFCW Local 1518 represents 24,000 members working in the community health, service and hospitality, retail, industrial, and professional sectors across BC. To learn more about UFCW 1518 and its outstanding work, visit the Local Union’s website.