Manufacturing members at Panneaux Optimum are on strike – UFCW 501 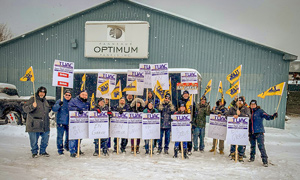 Saint-Léonard-d'Aston, Que. – November 18, 2019 – Negotiations have broken off between unionized workers at Panneaux Optimum, members of UFCW Local 501, and the employer.

Since last Friday, the 15 UFCW members at this company – which specializes in the manufacturing of plywood panels – have been on strike to protest their employer's refusal to negotiate a first collective agreement in good faith. The negotiations that began last May resulted in three unsuccessful meetings, and the members still do not have a first contract.

"The Optimum Panel workers, who have been members of UFCW 501 since November 2018, have set up picket lines since the employer does not seem willing to respond to the union's legitimate demands. Negotiations are mainly hampered by salary issues. We hope that the workers' message is heard and that this process will lead us to a negotiated settlement," says UFCW 501 Negotiator Martin Daudelin.

UFCW Local 501 represents over 19,000 members working at more than 410 businesses across Quebec and northern New Brunswick. To learn more about UFCW 501, visit the Local Union’s website.