UFCW stands with Uber drivers at Supreme Court of Canada 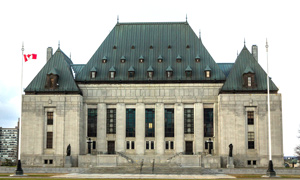 The outcome of the case could have a huge impact on Uber and other gig workers and is one step that UFCW Canada hopes will eventually lead to legally defining gig workers as employees. Currently, Uber claims drivers are independent contractors, that Uber is not their employer, and that the company is just a provider of an app that helps drivers find customers and handles the billing for a fee. The contract Uber drivers must sign forbids class action suits, and instead imposes a costly mandatory arbitration process that takes place in the Netherlands.

The case before the court, Uber Technologies Inc. et al. v. David Heller, regards whether Uber’s mandatory arbitration clause is illegal, either because it unlawfully contracts out of the Employment Standards Act and/or is unconscionable. The case arrived at the Supreme Court on appeal, after an Ontario lower court ruling paved the way for David Heller and other Uber drivers to potentially proceed with a class action suit against Uber to secure minimum wage, vacation pay, and other benefits required under the Employment Standards Act.

“Uber is not above the law, and its technology cannot be used as a shield to deny the labour, workplace, and employee rights of its drivers,” says Paul Meinema, the national president of UFCW Canada. “We will continue to stand with Uber drivers and all gig workers who deserve the same protections – including the right to unionize – that other workers have access to.”

Hundreds of Uber drivers in the Toronto area are already members of UFCW Canada, as the Uber Drivers United campaign continues to build momentum. Find out more about the campaign to bring justice to Uber workers here.