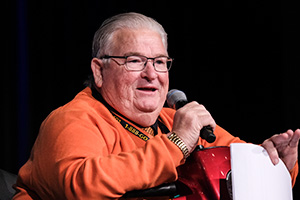 Calgary – October 16, 2019 – Douglas O’Halloran, president of UFCW 401 for three decades, a UFCW International Vice President, and a pillar of the UFCW family and the labour movement, passed away peacefully on October 14 after a long illness, surrounded by his family.

Brother O’Halloran was born in in Prince Edward Island and raised in Lethbridge, Alberta, where he first became a union activist while working at Burns Meat Packers in 1973. Over the next 11 years he served in a number of capacities, including rank-and-file president of that local; president of the Lethbridge and District Labour Council; an executive board member of the Alberta Federation of Labour; and later as a full-time union representative.

In 1985, Brother O’Halloran was hired as the western assistant to the UFCW Canada National Director, and was responsible for Western Canada where he served for the next four years.

In 1989, Douglas O’Halloran became President of UFCW 401, and continued to be elected by the membership to hold that office until he stepped back earlier this year due to his illness.

Over his three decades as president, he was admired by, and inspired by the solidarity of the members, who called him “Doug” and knew him as straight-ahead, no nonsense leader who lived and breathed to serve the membership. Employers knew that too, as Brother O’Halloran personally led the charge in a number of major battles to win justice, respect and fair collective agreements across Alberta. During his presidency, Doug helped grow the membership to 32,000 members – the largest private sector union in the province – and a force to be reckoned with in some of the biggest Alberta labour battles ever, including the successful 2005 strike for a first contract at Lakeside Packers where Doug returned to lead the strikers just days after being run off the road by some Lakeside security guards.

His courage and tenacity were founded on his heartfelt belief in workers, the labour movement and his union – a belief that even in illness, he never surrendered. “Serving as your President for the past 30 years has been one of the greatest privileges of my life,” Doug wrote in a message to his members. “I was constantly amazed by the membership and staff’s tenacity and commitment to making life better for our membership and all Albertans. As a Local we have grown and made significant contributions to the labour movement in Alberta. I challenge you all to keep making the changes, and fighting the fights, that make the world better.”

A funeral service will be held next Tuesday.

“Our hearts and thoughts go out to Doug’s family, and to Local 401 members,” says Paul Meinema, the national president of UFCW Canada. “Throughout his life, Douglas O’Halloran was fearless and unstoppable in his commitment to his family, to the membership, and to our union family. We will never forget the difference he made in our lives, our union and community.”