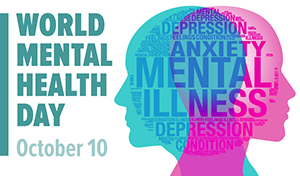 Toronto – October 5, 2019 – Every October 10, people around the world observe World Mental Health Day to raise awareness of the stigmas surrounding mental illness and the importance of promoting mental health. The theme of this year’s World Mental Health Day is suicide prevention. According to the World Health Organization (WHO), every 40 seconds someone loses their life to suicide. That is why, on October 10, WHO is asking people to take 40 seconds of action to learn about suicide prevention.

According to the Public Health Agency of Canada, an average 10 people die by suicide every day in our country, or roughly 4,000 Canadians per year. As well, for every 1 death by suicide, there are 5 self-inflicted injury hospitalizations, 25 to 30 attempts at suicide, and 7 to 10 people who are profoundly affected by a loss to suicide. Suicide also ranks as the second leading cause of death among children and youth up to 29 years old, and the third leading cause of death for adults who are 30 to 44 years old.

In the workplace, 40 seconds of action can literally change someone’s life. And the one thing we should all be mindful of is that suicide is preventable. At UFCW Canada, we continue to take steps to ensure that members working in all sectors of the economy can learn about the importance of mental health. Our union does this by focusing on prevention through education, as well as a directed campaign, called Mind Matters, aimed at ending the stigmas associated with mental illness.

UFCW believes that mental health promotion belongs to all of us, because no one is immune to mental illness, regardless of your occupation, gender, ethnicity, or any other marker of your identity.  This October 10, I encourage you to engage in at least one action at your workplace to support suicide prevention.  Below are some suggestions for effective actions you can take:

Your mental health starts with you, and it is just as important as any other health-related matter in life. Take care of your own health to support those around you. And remember that 40 seconds of action can help prevent a loss to suicide.