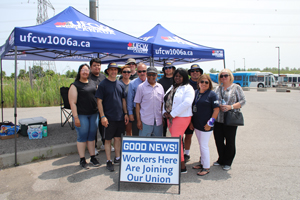 Markham, Ont. – July 15, 2019 – Nearly 300 transportation workers at Miller Transit Limited are the newest members of UFCW Local 1006A after recently voting to join the union.

“What an incredible victory for workers at Miller Transit Limited, who came together to make their voice heard for strong and professional union representation,” says Wayne Hanley, President of UFCW Local 1006A. “Congratulations on coming together to achieve positive change at work,” he adds.

The new members provide transit services to the Markham region and work as drivers, cleaners, and mechanics.

“We are so proud of the team of dedicated workers and organizers who put months of tireless work into making this a successful campaign,” says Lesley Prince, Organizing Coordinator at UFCW 1006A. “It was such an honour to work with this group of inspiring workers, who were looking out for their colleagues’ best interests,” she adds.

Workers at Miller Transit Limited joined the union to gain a voice on the job, eliminate favouritism, and ensured concerns regarding grievances and workers’ compensation issues are addressed. To read more about the Miller Transit workers’ successful campaign to join the union, click here.