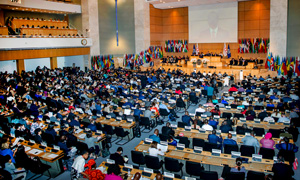 Geneva, Switzerland – July 4, 2019 – UFCW Canada welcomes the International Labour Organization’s (ILO) adoption of new global standards on Violence and Harassment in the World of Work. The standards, which take the form of a Convention and Recommendation, were recently adopted at the 2019 International Labour Conference in Geneva and come as a result of sustained campaigning by labour unions.

The Convention and Recommendation state that every man and woman has the right to work free from violence and harassment in the workplace. They recognize working people in a range of situations – job seekers, workers in employer-provided accommodations, and workers travelling to their jobs – in all areas of employment and also acknowledge the key role that collective bargaining plays in securing and implementing inclusive, integrated, and gender-responsive approaches to preventing violence and harassment in the workplace.

According to the International Union of Food, Agricultural, Hotel, Restaurant, Catering, Tobacco and Allied Workers' Associations (IUF) – which UFCW Canada is a proud affiliate of – employer representatives at the ILO attempted to restrict the content and application of the standards, but many governments supported them and they were ultimately adopted.

Of special importance to IUF affiliates in the hospitality sector, including UFCW Canada, is the recognition in the Convention that workers have the right to be protected from violence and harassment by ‘third parties,’ including clients, customers, and service providers.

As well, thanks to pressure from trade unions, the Convention recognizes the impact of domestic violence in the world of work and calls for concrete measures to address this issue, including through collective bargaining.

“UFCW welcomes the ILO’s new standards to combat violence and harassment in the workplace and we encourage governments at all levels to recognize these standards by implementing and enforcing them through legislation,” says Paul Meinema, the National President of UFCW Canada.  “Our union is especially encouraged to see measures on domestic violence and its impact on work – an issue that UFCW has been addressing, and will continue to address, through collective agreements across Canada.”

To read more about the global standards to combat violence and harassment at work, click here.

Founded in 1919, the International Labour Organization (ILO) brings together governments, employers, and workers and their unions in over 187 countries to set labour standards, develop policies, and devise programs that promote decent work for all women and men. To learn more about the ILO and its important work, visit the ILO’s website.