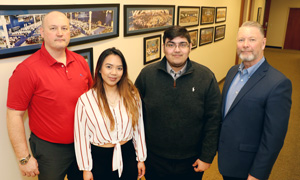 "We asked the membership about what they needed to change in the collective agreement, and along with Dustin, Gord, and Owais, we were able to negotiate those changes and we were able to go above and beyond what was asked of us,” says Jalandra. “Overall, we received a new agreement that the membership was happy to accept. We also had a larger turnout during the ratification meeting,” she adds.

“We are proud to help workers in a diverse array of sectors achieve fairness at the bargaining table,” says Wayne Hanley, President of UFCW Local 1006A. “Once again, our negotiating committee at Cineplex showed why workers are increasingly turning to 1006A to help improve their rights and livelihoods at work. Thank you to our terrific committee and the membership for working together to achieve this contract,” he adds.

To read more about the new union contract at Cineplex, click here.