Manufacturing members at AGF Access are on strike - UFCW 501 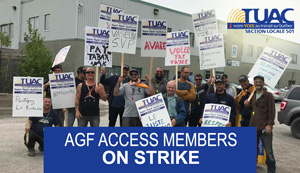 Quebec City – June 24, 2019 – Talks have broken off between the employer and UFCW Local 501 members working at AGF Access (an affiliate of AGF Group). The manufacturing members at AGF, who make scaffolding and fences, went on strike on June 13 to protest six unproductive meetings with the employer.

“The AGF Access members have been without a contract since December and have called for a strike after the employer failed to adequately respond to the union’s proposals,” says Claude Ratté, a UFCW Local 501 negotiator. “The sticking points are mainly wages, benefits, and the duration of the collective agreement. We hope the workers’ message will be understood by AGF and that the process will lead to a negotiated settlement,” he adds.

UFCW Local 501 represents over 18,000 members at more than 410 businesses across Quebec and northern New Brunswick. To learn more about UFCW 501, visit the Local Union’s website.