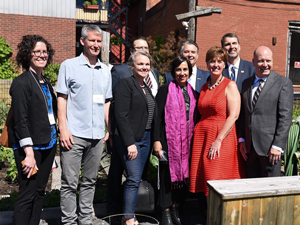 Montreal – June 18, 2019 – The voice of Canada’s food workers, the United Food and Commercial Workers union (UFCW), welcomes the announcement of the Food Policy for Canada. The UFCW was on hand in Montreal on June 17 to mark the occasion with other stakeholders, community organizations, and Agri-Food Minister Marie-Claude Bibeau.

Entitled “Everyone at the Table”, Canada’s first-ever national food policy includes several important commitments that have been top priorities for UFCW throughout the consultation process.

In particular, UFCW welcomes the commitment to create a national advisory council. Food workers are central to the creation of a healthier and more sustainable food system, and UFCW is keen to work with industry partners and civil society organizations in advancing the Food Policy for Canada. As such, UFCW will seek a seat on the Canadian Food Policy Advisory Council.

Representing more than a quarter of a million food workers in every link of the food chain, UFCW also welcomes the federal government’s commitment to promoting Canadian-made food products, as well as new resources for the Canadian Food Inspection Agency (CFIA), strengthened efforts to reduce food waste, and added supports for community-led initiatives and the North.

UFCW also welcomes the commitment to create a National School Food Program which, once established, will impact thousands of Canadian children – many from families who work hard at low-wage, precarious jobs – living in food insecurity.

The United Food and Commercial Workers Union (UFCW) is Canada’s neighbourhood union, representing thousands of hard-working people in more than 600 communities across the country. UFCW members work in every aspect of the food industry and other key economic sectors.