Politics Blog: Have purveyors of hate found a political home? 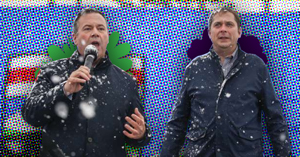 Toronto – May 16, 2019 – Hate crimes in Canada have increased by 47 percent since 2014 and have largely been driven by incidents targeting Muslim, Jewish, and Black Canadians.

Many are quick to blame events south of the border, where U.S. President Donald Trump panders to white nationalist groups while insisting that racism is not a problem in America. Whenever there is an act of extremism committed by a Muslim or brown-skinned immigrant, Trump is quick to comment on Twitter, but he takes little notice when hate crimes are committed by white Christians or non-Muslims. And within the President’s Republican Party, you have the likes of Steve King, who doesn’t think there is anything wrong with being a white supremacist.

But it isn’t just Trump’s pandering to hate groups that has fueled the increase in hate crimes in Canada. Here at home, we have Canadian politicians playing the same game and it appears to have empowered racist groups.

Conservative Party Leader Andrew Sheer did not hesitate to speak to the Yellow Vest convoy when it reached Ottawa in February, even though many in the crowd were not there to protest the lack of pipelines but instead were more interested in denouncing immigrants and refugees. At the protest, Sheer was followed up by Faith Goldy, a known white supremacist who is so inflammatory and offensive that she was deemed unfit for the ultra-right-wing website Rebel Media, who fired her in 2017. That same year, Sheer appeared on Goldy’s show before Rebel let her go. Ontario Premier Doug Ford, meanwhile, posed for pictures with Goldy when she attended his annual Ford Fest barbeque.

In the lead up to the recent Alberta election, United Conservative Party leader Jason Kenney had to remove several candidates when it was revealed that they had made racist remarks in the past, and in one case had posed for pictures with the Soldiers of Odin – another anti-immigrant group.

With a federal election just months away, the newly announced NDP candidate for Dartmouth Cole-Harbour, a Muslim woman, has opened up about the hateful comments she has received based on her religion and ethnicity. She has shared stories about people telling her she is not wanted in their community, that Muslims are terrible, and that she does not belong in Canada.

At the same time, former Conservative MP Maxime Bernier has left the Conservative Party to form his own party – the People’s Party of Canada – which is taking a hardline stance against new immigrants to Canada.

It is clear that Conservative politicians are using anti-immigrant and anti-Muslim sentiments to create a sense of fear and angst among Canadians who are feeling economically insecure, and to bind those who are suffering to their political agenda. They are using race to divide and conquer Canadians, and we cannot let this happen. We must call out racism wherever and whenever we see it. And we need to ask why white supremacists and other hate groups have seemingly found a home in both the Conservative Party and the People’s Party of Canada.