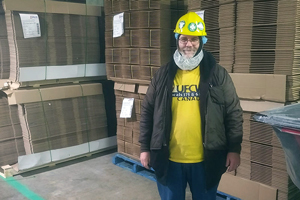 Grimsby, Ont. – April 9, 2019 – Richard White has been a proud, long-standing member of UFCW Canada Local 175 for decades. He works at the Fearman’s Pork plant in Burlington, Ontario and became active as a union steward in 2003. Like many other UFCW members, Richard also likes to get involved in his community.

Richard volunteers his time with the Kinsmen of Grimsby. One of the many events that Richard assists with is the Kinsmen Club of Grimsby’s Annual Greater Grimsby Mini-Putt fundraiser. The fundraiser is a one-day event that usually sells out in less than two days. This year’s fundraiser took place on March 10 and saw 30 teams raise money for the West Lincoln Memorial Hospital’s Project X-Ray, a community initiative that helps fund medical imaging equipment at the hospital.

Along with the Kinsmen, Richard and many other volunteers and supporters are proud to have raised $15,000 at this year’s event.

Richard wanted to thank UFCW Local 175 and all the other groups whose support make the Greater Grimsby Mini-Putt event a success. “With the help of everyone, the Kinsmen are able to achieve their mission of giving to our community’s greatest need,” says Richard.