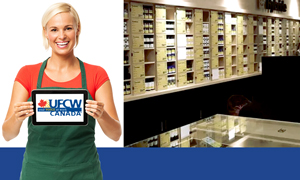 Montreal – February 27, 2019 – UFCW Canada is proud to announce that workers at the SQDC cannabis retail store in Mirabel have said “Yes!” to joining Canada’s leading union in the cannabis sector. This is the third SQDC location where members have chosen UFCW because of its expertise in the retail trade as well as the emerging cannabis sector.

The SQDC is the government-controlled cannabis retail chain in Quebec. The new bargaining unit at the Mirabel SQDC was certified by the Tribunal administratif du travail (Administrative Labour Tribunal) on February 26, 2019.

Guillaume Lacasse is one of the new members at the Mirabel SQDC. He explained that following a meeting with UFCW members at a previously organized SQDC location in Rosemount, they realized that the UFCW was one step ahead and experienced at bargaining contracts in the cannabis sector. "It gave us confidence to talk to the UFCW members in Rosemont. We too want to be at the bargaining table. With UFCW, we know that our voice will be heard,” said Brother Lacasse.

"UFCW enthusiastically welcomes the arrival of this third group of SQDC members from the Laurentian region and we thank them for the trust they place in us,” says Antonio Filato, the president of the UFCW Provincial Council. “By uniting their voices with those of the Rosemont and Rimouski store workers, these new members are helping to strengthen the vitality of our union and can count at all times on the solidarity and support of the 55,000 UFCW members of our organization in Quebec.”

"While other unions are still considering whether to unionize locations individually or as a group, UFCW has already met with its members to find out what they want,” adds Brother Filato. “In addition, the negotiation process is already underway with the SQDC and the situation is changing rapidly at the Rosemont branch. Members for the bargaining committee have been selected and two meetings with the employer have already taken place. This is the true balance of power through a union that understands the reality of retail workers.”

To find out more about Canada's union for Cannabis workers, visit www.cannabisworkerscanada.ca.