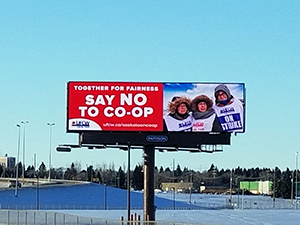 Saskatoon, Sask. – February 19, 2019 –  As UFCW Canada Local 1400 members continue to strike for a fair future at Saskatoon Co-op, a string of recent news stories and opinion pieces suggest the members’ call for fairness is resonating in the media and with the public.

Members at the Co-op have been on strike since November 2018, fighting back against their employer’s abandonment of co-op principles like pay equity. The striking workers are asking for a fair and equitable collective agreement, and it appears their message is connecting with local media outlets and members of the Saskatoon community.

In a recent op-ed in the Regina Leader-Post, University of Saskatchewan associate professor Charles Smith and University of Regina associate professor Andrew Stevens argue that the “Co-op labour dispute (is) a struggle worth supporting” and that we “should expect more of a co-operative.” They point out that the Saskatoon Co-op members’ campaign for pay equity and a fair wage scale is essential not only to fighting inequality and wage inequity within the bargaining unit, but also in the broader community and the grocery industry as a whole.

“Working people are falling further behind while the value from their labour is increasingly going towards high wages and profits for Canada’s wealthiest individuals and corporations,” the authors write, while noting that Federated Co-operatives Limited (FCL) reported $1 billion in profits in 2018.

Another article, published on the CBC News Saskatoon website, asks “How hard will the Saskatoon Co-op brand be hurt by the ongoing strike?” In the story, Edwards School of Business associate professor David Williams says that striking Saskatoon Co-op workers are “fighting for exactly what the company stands for.”

"They are a co-op, altruistic and caring," he says of the Co-op's brand image. “The ironic thing is that…symbolizes why the workers are on strike." Williams goes on to add that, because most consumers’ shopping habits are based on convenience and routine, the longer the strike goes on, the harder it could be for the Co-op to get back any customers they have lost.

Other recent news stories on the Global News and CBC News Saskatoon websites observe that whereas the union is willing to negotiate and come to a compromise with the company, Saskatoon Co-op continues to dig in its heels despite losing major revenue from the strike.

Wondering how you can help striking UFCW 1400 members at Saskatoon Co-op? Send a message to Co-operatives and Mutuals Canada, Federated Co-op, and the Saskatoon Co-op Board of Directors. Tell them that a fair contract means real compromise and an equitable agreement that provides fair pay for all Saskatoon Co-op employees. Act now by sending a message today!