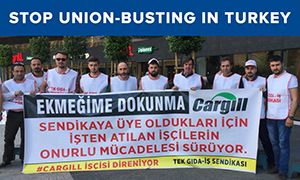 Attention all UFCW Canada activists and allies: your urgent support is needed to help stop the union-busting tactics of global meat giant Cargill, who is trying to prevent workers in Turkey from expressing their democratic right to join a union.

Shortly after the Tekgida-İş labour union, an affiliate of the International Union of Food, Agricultural, Hotel, Restaurant, Catering, Tobacco, and Allied Workers' Associations (IUF), applied to represent workers at a Cargill plant in Bursa-Orhangazi, Turkey, fourteen workers involved with the organizing campaign were dismissed from their jobs.

According to the IUF, these dismissals are part of a pattern of anti-union practices at the Cargill facility. They follow the dismissals of seven other workers fired by management in 2012, 2014, and 2015 solely as a result of the employees’ attempts to unionize. The Turkish Supreme Court found that Cargill workers had been unfairly dismissed in each of these seven cases, and Cargill has been repeatedly informed of its blatant rights violations by the IUF and its affiliates, but the company continues to engage in union-busting activity.

Together with UFCW Canada and the IUF, the international labour movement is therefore calling on Cargill to immediately reinstate the fourteen workers who were recently dismissed and to provide them with full back pay. We are also urging the company to ensure that all workers at Cargill Turkey can freely exercise their right to join a union going forward.

ACT NOW! Send a letter calling on Cargill to reinstate the fourteen dismissed workers and allow all workers at the Bursa-Orhangazi plant to freely exercise their right to join a union. Send your message today!

As a member of the IUF and UNI Global Union, and a proud affiliate of the UFCW International Union, UFCW Canada is fully committed to supporting global solidarity efforts that advance human rights. To learn more about UFCW Canada’s international solidarity campaigns, visit our Global Solidarity website.