By the Numbers: Gender Wage Gap persists even at executive level 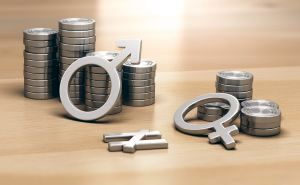 Toronto – January 9, 2019 – While it is well-known that women in Canada often face a “glass ceiling” when trying to advance in the workplace, a new report shows that the ceiling is double-paned, as women who reach the executive level are paid less than their male colleagues.

Written by the Canadian Centre for Policy Alternatives, the report finds that the gender wage gap – the difference in earnings between men and women at work – exists even at the highest levels of corporate Canada, with women executives making significantly less than their male counterparts. Below is a summary of the report’s findings.

The amount that women CEOs and top executives earn for every dollar that their male colleagues make.

The average compensation for women in top executive positions in Canada.

The annual difference in earnings between women and men in executive positions as a result of the gender wage gap.

The amount that the average women earns, among all full-time workers, for every dollar that their male counterparts make. Evidently, the gender wage gap widens when women reach executive positions.

The percentage of all Canadian CEOs who are women.

The percentage of all Canadian top executives who are women.