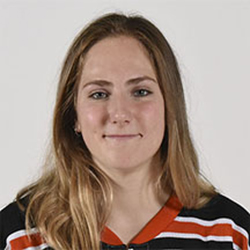 Whitby, Ont. – November 26, 2018 – Trevor McQuigge, a longstanding UFCW Canada Local 12R24 activist, is elated that his daughter, Rachel, has been named Goalie of the Week in the ECAC Hockey conference, one of six conferences that compete in NCAA Division ice hockey in the United States.

Currently attending Princeton University on scholarship in New Jersey, Rachel is the goaltender for the Princeton Tigers women’s hockey team. She won the Goalie of the Week distinction by earning her first career shutout against the Colgate Raiders and making 31 saves against Cornell Big Red. At 0.96, McQuigge also had the best goals against average in the league, allowing only two goals and clocking 64 saves for a .970 save percentage. The Princeton Tigers are currently first place in the league.

The Princeton Tigers’ next game is against the Quinnipiac Bobcats on November 30, where Rachel will be looking to continue her impressive goaltending streak.